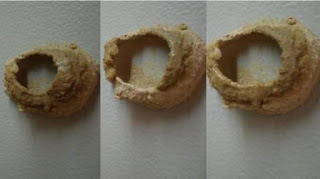 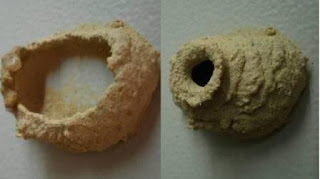 It was last week on Friday after I went back from Panching that I saw the nest. It was in the first phase (should I say) like the above picture – it wasn’t done yet till the end of the day. Initially, I thought of cleaning the thing since it was so weird for such a thing to occupy a space in my study desk.

But wait. Not yet!

What if I see what’ll happen...

The next day, in the calm Saturday morning, after Subh, like usual I let the window opened for my room to get some ventilation. I sat on the chair, heading to the computer. Suddenly, I saw that insect came through the window and with it a lump of wet soil. I could see she struggled so hardly to carry the soil, bringing it to the nest. You know what; she resumed building the nest after a night rest!

Fortunately, I didn’t demolish the nest the day before. If I did, then she had to make it from the very beginning.

From the pictures above, you could see that the nest had gone many phases to make it done. Subhanallah. More interestingly was that, my room is at level 4 and of course she collected the soil from the ground and thus she had to do that again and again before she could actually give birth (or is it that she laid the eggs?) to her babies in it.

This reminds me of the sacrifices my emak has done to raise me up. I have a story on how she gave birth of me. What she was experiencing was so terrifying for a first-time-giving-birth mother. Later I’ll make a special entry for that. Should I wait till Mother’s Day to come? Naaah~

Back to the flying insect and her nest, unfortunately the nest was attacked by ants the day after and the babies in it were dead. Hm~ what an anticlimax~
Email ThisBlogThis!Share to TwitterShare to FacebookShare to Pinterest
Posted by Unknown at Wednesday, August 27, 2008

wow. it was made from soil. really nice.

u shud take care of urself, otherwise it will sting on you.. hehe

dan aku cam pasti serangga tu ade menggunakan something biochemical from her mouth to make it wet and not brittle.