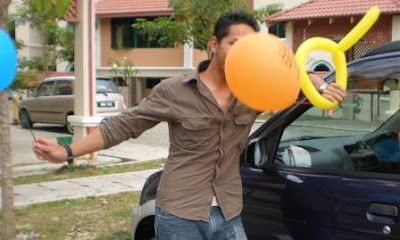 Erm... Malu la jadi senior. Segan dengan junior-junior lain. Tutup muka dengan belon la camtu~
I am a type of person who likes to know new people. In fact, that’s what I believe the religion promotes the believers to do – to know people. Aren’t we created with so many different tribes for we to know each other? I take that understanding from the Holy Quran to personally obligate myself to get to know people each and everyday.

Now, putting myself as a fourth year student in this university, I feel something different. I am used to getting juniors in the previous semesters, but this semester it is quite different in the sense that I am now a fourth year – a final year student who is seen to be among the eldest-so-that-the-most-mature person in the campus, which is actually so not me. Huhu...

Maybe some have seen that most of the time I’ll behave like not-a-senior but rather a child isn’t it? But the fact is that, I am a fourth year student! Don’t you see the obvious contradiction?

Well, I'd like to say that personally I think age doesn’t matter and age doesn’t indicate anything regarding your level of maturity. To an extent, I would say maturity must not necessarily be shown in typical behavioral characteristics: calm, controlled, not talkative etc. Most importantly, what I believe is that, in whatever age you are now, be yourself. Let the nature brings you towards being the real you. I mean, as long as you can push yourselves towards betterment from time to time, that’s maturity to me.

Comparing between one to another by taking the age as a reference is somehow unnecessarily factual. This is because the speed to develop level of maturity may vary from one to another depending on the environment and backgrounds one is in and of course not to mention one’s capability.

That’s pretty much of it, I think. :D

By the way, these few weeks I have been hectic with, ok, to tell the truth, with Friendster! Haha... So many juniors (sisters especially) who add me as friends and of course I’ll reply their “application” with approval and a reply testimonial thanking their willingness to view my profile and adding me as a friend. In the same testimonial, it says also a wish for them to greet me whenever and where ever they see me around the campus. One of my weaknesses is to remember people’s names and sometimes people’s faces. It’s because the one shown in the pictures must not always likely the same like the real look. Huhu... usually the real person looks more beautiful than in the picture.

Is this an STBB? You can take it as STBB if you’re offended. Haha...
Email ThisBlogThis!Share to TwitterShare to FacebookShare to Pinterest
Posted by Unknown at Thursday, September 11, 2008

the real person looks more beautiful than in the picture.

chewah,rmi sister add eh?
i havent add you yet. ;)

i am honored to hear that :)