I Wanna be a TV Programme Host 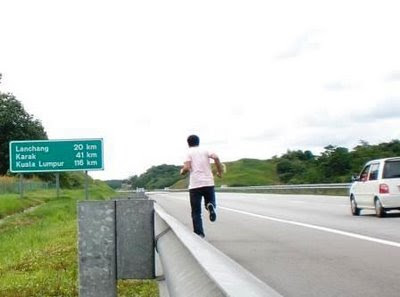 For obvious reason, this programme serves the host with travelling and eating! The title is itself self-explanatory. The production team brings you to some places which you don’t usually come without a reason, you taste the foods, give some comments and wallah! You’re full! Buuurrrrppp... But the bad thing is, you’ll gain some kg’s in your weight. Well, this is said based on an obvious example. You get what I mean? Huhu~

Yes, it’s all about travelling all around the world for, I think, free! Isn’t it? You go to the country, explain to the participants what they need to do, explain to the viewers about the country and the culture, and maybe you’ll get the chance to try the games and the challenges the participants are playing. Argh, I’m so craving for trying bungee jumping next to the Nevada waterfall! Not only that, there’ll be party in between days of competition from which you can enjoy yourselves like nothing gonna stop you from taking pictures together, smiling and getting yourselves wacky around.

The easiest programme for a host to be in, I think; just few lines to speak (which usually you can do without script) and the rest, the production will do it for you. Go enjoy yourself in the country from which the prophets were said to be born at. I think what they’ve done so far, by inviting Mawi as the host is not more than making use of his popularity. Not much inputs and information are in the programme. Thus who would say no if you’re appointed for such an easy job right? Nak jadi cameraman pun berebut kot?

This is the best informative programme. Instead of spending the time visiting here and there without much input for the viewers and for the production crew themselves, this programme provides a wide variety of information, knowledge and directed entertainment ranging from the history of the prophets to the culture of the current residents. Hey, how many of us could stand the heat in the dessert, right? Zainal Abidin Ariffin, are you looking for a successor? Hehe...
Email ThisBlogThis!Share to TwitterShare to FacebookShare to Pinterest
Posted by Unknown at Saturday, December 13, 2008

it's kind of suite to you :D

by the way, as pun tengah ngidam2 nak wat bunjee jumping...huuuu
since 5 years ago..

all the best..nampak merepek maybe, but u are what u think. If u think u can, yes it's not impossible

from modelling to tv host eyh?? haha! well. a man can have a million dreams kan?