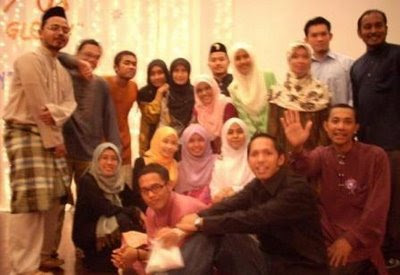 Yes. I was on the stage twice.

One for the singing, and earlier to that was this angklung performance. It was a debut for such performance in IIUM Kuantan Campus and we were proud to perform it in Kuantan.

From what I've been informed, the Kulliyyah of Science will buy a set of angklung which costs about RM10,000 for the students' cultural activity in the kulliyyah. Wow, that's great! During the performance, I could see the smiling face and eyes of the Deputy Dean of Student Affairs of the kulliyyah. That would be a good start for angklung in Kuantan, I think.

But let's wait until that becomes true in the first hand. Who knows, maybe Angklung Club will be established here in the future?

Playing angklung is not just like shaking it uncoordinatedly. You need intensive trainings with other members of the group and through the trainings, you'll gain a lot of things and most surely, you'll know your friends and teammates more. Don't you agree, members of Angklung Club IIUM Gombak?

Kasi gegarrr!!!
Email ThisBlogThis!Share to TwitterShare to FacebookShare to Pinterest
Posted by Unknown at Tuesday, October 21, 2008

but give it a try~