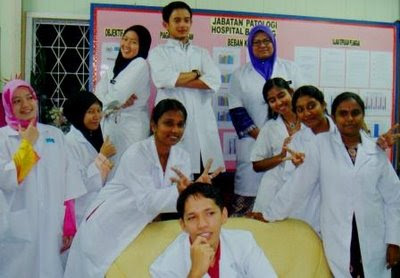 I was with the PA of Biomedical Department of KOS, Kak Mai having a chat while there was nothing else to do when suddenly the Dean of the kulliyyah entered the room to see her. I as usual greet him professionally and offered him a seat. Ok, that's not the point. :D

Then the Dean talked with Kak Mai as I had nothing to do with what they were discussing so I just kept quiet while my ears were amplified to the maximum level and again that's not the point. :D

Suddenly a female student entered the room and directly talked with Kak Mai, ignoring the senior people inside the room to pass few documents to be forwarded to few people under the department.

They had a talk for few seconds until that Kak Mai asked her a very basic question, "Kenal tak Dean kuliyah kita?"

"tooooot (not from Biomed of course)"

Mind you, that conversation happened right in front of the Dean and he did nothing but keeping his mouth shut, which I believe to observe how well that particular student knew him.

Come on people... That is the very basic thing to know when you enter a community - to know the leaders. They are the ones who are responsible in making our life easy in the community. They are the thinkers, the managers and the backbone behind the peace and harmony that we are enjoying.

Like the case above, Kulliyyah of Science is a small kulliyyah where everyone meets everyone but how come you don't know who the Dean is? That explains to what extent you are ignorant to your surrounding and happenings around the world.

Now let me ask you, do you know who is the current President of the Students' Representative Council of IIUM Kuantan Campus? It's him.
Email ThisBlogThis!Share to TwitterShare to FacebookShare to Pinterest
Posted by Unknown at Tuesday, February 24, 2009

btw. wat makes u tink dat EVERYTIME i wrote sumting emo it has to do wit xam n kuiz???????? thr's a hidden meaning that i like to convey n hope people could relate it wit themselves whn i wrote dat puisi. though..mmg tyme tu tgh emo pon but dats not d point. :p

pape pun, we need to know our leader rite? =)

ok takmo komen yang tu. out of topic and sooooo not the point :p