Anonymity is a Blessing 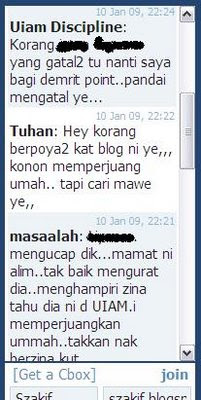 If you notice, I allow anonymous comments to be posted in my comment rooms and I put no word verification to ease the sending of comments and feedback for myself and most importantly for my readers. True, I was attacked by spam few times but that's still under control. Well, what's with this blog other than just a blog?

However, that doesn't mean readers and commentators could do anything they want; posting threat, unethical comments, fraud etc. Please people, internet is just like our real life: we have to be ethical, disciplined, well-mannered and you can name other adjectives that tell you have to be nice even if it comes to writing in the internet.

Like few cases that happened recently, I myself have been attacked with few threats in one of my entries (not to be specified) that he/she sent curse and slander, but alhamdulillah, after dealing with the attacker nicely, he/she stopped the immoral comments. Like the case in this blog, the commentator(s) sent shoutouts that basically tried to give advise, but unfortunately in the wrong way (see the image above). One thing is that, he/she was anonymous (although he/she named himself/herself with few names); and two is that, what sent were completely unethical.

Do you think by doing so would bring any good?
Come on, face the life and be real.
For those who have been attacked with such things in the internet, first thing first; do not be panic. Relax. That's just another challenge in your life. Second, do not fight back but deal with it calmly. You may choose to be silent and you may also choose to reply what he/she said about you but never challenge him/her with anything like saying "who do you think you are to say that?" or worse. What you need to do as a first step of dealing with this thing, is to guide him/her towards solution, not towards other problem. If he/she does has personal problems with you, tell him/her to solve them behind the scene, not to let the public to know your problems. Email is the best way to solve such online problem; the commentator can still hide him/herself behind anonymity and you can exchange emails in order to discuss and solve the problem.

Yes, anonymity is a blessing in the internet but use it wisely.
Email ThisBlogThis!Share to TwitterShare to FacebookShare to Pinterest
Posted by Unknown at Tuesday, January 13, 2009

use it wisely, i love that.

things get complicated when they said something that we don't understand...
maksudnya, point yang nak disampaikan tak dapat difahami oleh orang yang diberi 'nasihat' tu...
sometimes,anonymous can be a good friend but some can be a bad enemy...
hmmm, can I say like that???

when it comes to this kind of people, i always wonder that yes! this world ader ramai org yg mcm2 perngai.yg kdg2 the behaviour tak bley digest dgn my body.faham ke?

let them be.they are not worth it.
wise people dont do such thing. :)

when i started blogging..i knew the nature of my blog n my posts wud attract such ppl and such comments..i dun have a problem with any of it..what i dun like..is ppl coming n leaving comments anonymously but they nvr come back.

iloveyoga was ok..he/she replied to my post (which was in response to his/her comments in my cbox) so an actual discussion did take place 4 a while..some time b4 dat there was dis guy who attacked many of us..4 the school uniform issue..calling most of us guys gay 4 not wanting 2 see girls dress in such ways..we all responded..but he never returned..pengkritikblog has been awol 4 a long time..

i dun mind such ppl n such comments..in fact i njoy having such scenarios..but it gets frustrating when they nvr return =(

what do you actually hope/expect if they did return and read your replies?

i've seen the blog and read the shoutmix..i cant believe this...US, UK, Europe or any other univ.. i can accept it..but u guys are all student and ex-student UIA kan..?at least most of you.. seriously..this is beyond my imagination...mudah mudahan ini dapat diperbaiki k..insya'allah..


"Please people, internet is just like our real life: we have to be ethical, disciplined, well-mannered.."

well, ok.. maybe somehow true and i can also understand your concerns and experience... However, to make it interesting...let us try to look it from another different angle... :-)

it's very subjective and it's all about perspective aite?

i understnad..with all these prvlieges, people should be educated to behave and well mannered in using this channel of communication. BUT.. we are actually not in the position to impose the rule or to say that "WE HAVE TO"...none of us does...

we can encourage and advise but we can never impose coz internet or virtual league belong to 'everybody' and 'nobody'...hehehe menyampah aite? but this is reality bro.

so, when we decided to have a blog..we should have expected all these before hand..tat's y the blog's setting has given us the option/right to 'moderate' any comment bfore posting. When we published our blog to public without moderation, means we are also agreeable to open ourselves/ our entry to any kind of comment..i repeat "ANY KIND OF COMMENT"...

when we include shoutmix..means we have agreed and willing to take another additional risk which is the comment is on real time and we cant delete it(can we?)..

well, true...they shouldnt post anything and everything they like..but we also are not in the position stop them from doing so coz there is no binding contract between bloggers and readers...it's just based on our understanding and expectation only...there's neither agreement nor disagreement from the other party...

I remember this quote :"We can choose the method but we cant choose the implication"...takkan minum air mineral rasa coca cola pulak kan..hehehe

what you and knowlee did in handling the situation was acceptable and nobody can say it right or wrong actually coz it's your blog and there's no h & f rules on how you should handle them..Our action is determined by our own judgement and consideration..We are the master of our blog...and of course Master J has more adventurous way to deal with all these nuisance..hehehe

in the nutshell, in my opinion, we should try not to be too personally/emotionally attached to the virtual world coz by all means, it can never be equal to our real life.

anyway bro, i m impressed with you diplomatic way in handling the issue...keep it up...you are one of the examples of a true leader..

and yup, it's true. in my case, i am ready to get such comments to be posted in the comment rooms and in the chatbox. but once they have bad intentions, i will take action! come on, be mature and grow up. kalo ada masalah atau ketidakpuashatian, gunakan channel yang betol dan cara yang betol. bukannya dengan menghantar threat seperti itu. itu cara orang yang penakut dan tidak matang. unless it's true they are like that, fine~ we have to help them instead.

if they come back then we can have a proper discussion lah..ni diorg come n leave a comment..then i respond n give my own comment 2 his/her comment..pas2 habis..apa guna bg komen if u dun follow up dgn tuan pny blog?it's like a hit n run tau..u do "damage", but dun stay n take responsibility 4 ur actions..