This time, it's confirmed! No more co-currucular activities in Gombak. Tomorrow I'll be moving to Kuantan. Yesterday was my last activity here - Angklung Performance for Taaruf Week for the intake of Second Semester 2006/2007.

The night was so stressed. Looking at my friends face during the first 30 minutes before we went on-stage triggered my heart-beat almost to the maximum beat. But after that i cooled down because at the back stage, we made joke of each other, made "suara sengau" with Kak Nadia, entertaning others who still felt nervous.

Once we stepped up on the stage, show time! Angklung Club was the first musical group to perform (and in the same time to promote the club to freshies) and we did quite well for Ada Apa Denganmu (barulah aku tahu in English it means What's Wrong with You) and the best for Pandang-pandang Jeling-jeling. To keep the beat on track for angklung to me is quite hard since there were about 20 heads to be synchronized and that's why we missed the beat for the first song. But overall, we've made it! Hooray!

I really wanna mention this . ONE - that Nasyid group is loser! They came late and thus forced the PC to change the schedule on the spot. Not only that, they forgot the lyrics for Iktiraf song, putting the musical groups into chaos, including us - Angklung Club members. Ade orang sebelah aku tak nak main dah note B pasal he totally lost! Haha (matila dia kat sebelah aku lagi sekarang ni).

TWO - silat guys were not gentlemen at all! They saw girls holding heavy musical tools and instruments and what they did was just seeing them without any intention (how do I know? Hehe..) to help. Even there was an incident where the Gamelan instrument fell from the trolly and almost (setelah mendapat mesej daripada si mangsa) hit a girl, and what the-muscled-body-but-empty-in-the-head guys did was just stare and stare. 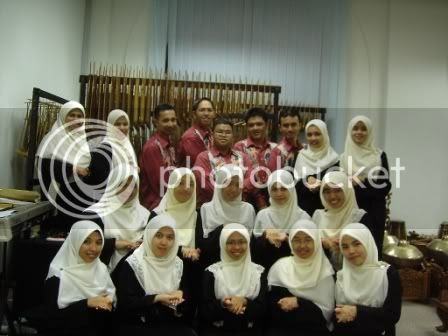 Angklung Club members who get involved for the performance. 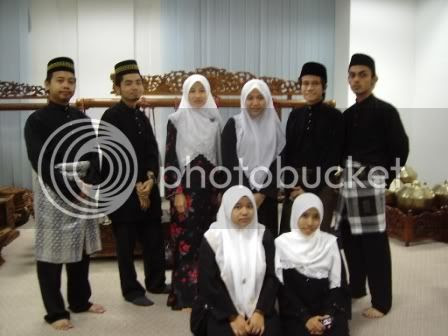 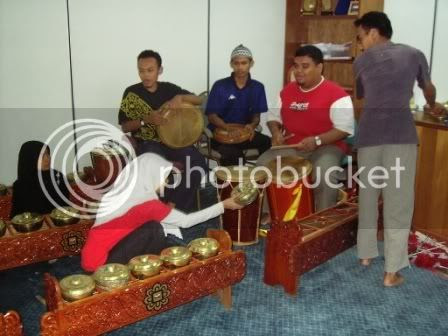 Caklempong group.
Email ThisBlogThis!Share to TwitterShare to FacebookShare to Pinterest
Posted by Unknown at Thursday, November 30, 2006